ELECTRONIC EVANGELIZATION, WHO? ME? U BET!

HARDWORKING MISSIONARY, "Down by the River Side" 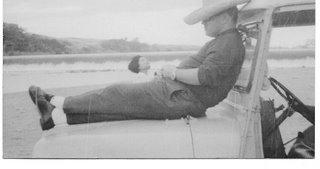 "Go therefore, and make disciples of all nations, baptizing them in the name of the Father, the Son and the Holy Spirit, teaching them all that I have commanded you. And behold, I am with you always, until the end of the age." ( Matthew, chapter 28, verses 19 & 20)

Over the last few months we have been hearing a lot about the missionaries who have come to this country from abroad to help resolve the "shortage" of priests. They come from Latin America, Asia and India and other places around the globe. They are missionaries, all right. Just as much as the missionaries that we know who have left the United States and Europe to go abroad to spread the Gospel.
When we think "abroad" we picture Africa, Burma, China, Nepal, India, Philippines, Samoa, Micronesia, Northwest Territories, etc. Never do we think that Indians, Irish, Filipinos, Guatemalans, Bolivians and others think of us as being "abroad". I’m here to tell you that yes, indeed we are abroad. It takes as much of an adjustment for these immigrants to adjust to us as it does for us to adjust to them. Here are a few glimpses into the adjustments required.

Oh, my God, I am going to the United States! I can’t believe it. This is marvelous! I won’t have to learn another language! Oh, thank you God. This is going to be easy.
One month later, I am writing to my brother who is still living in Barrio Villafuerte, San Mateo, Isabela, Philippines and I am telling him that I am glad to be the United States, but that I am wondering what I have to do to understand what the people are saying. Why are they telling me that they do not understand my reading of the Gospel? When they come to the office, why can’t I understand what they are saying? I always was the best English speaker on my class! Why do so many of them speak Spanish?
It is true that we have a cook in our “convento” (rectory) but we do not have any rice to eat. There is no bago-ong and the breakfast is very small, also with no rice. My friend from India is wondering why there is no spice in the chicken and no curry in the vegetables.
The people here are so direct. They tell us what they expect us to do and they tell us how we should manage the affairs of the parish. Imagine, there was a parishioner who told me that I should go to school to learn how to speak English. He told me this while I was in his house when he invited me for a meal. I did not feel very comfortable because there was no one there but me and his wife and two children. When I arrived the lady of the house asked me if I want to have something to drink. I politely refused. She just said, "OK, my husband will be here in a moment." She never brought me anything to drink. I was lost when they invited me to the table and there were only the five of us, and the children, 8 and 11 years old were sitting at the table with us. The man of the house was the one to offer the grace and the blessing of the food and he did not invite me to do that.
It is so difficult to gather people together. During the day all the adults are at work and all the children are at school. During the evening some of the adults are available here at church, but many have to go to attend events at the school of the children. Meetings do not start until 7:30 in the evening. Sundown means nothing here. During the weekend, the adults and the children are committed to sports events and they will not attend to church commitments. When you are out in the city you will not see any people walking by the side of the street. Most of those you see walking are the school children before and after the classes.
The management of the parish is different here. The diocesan office has a lot of power and authority. If the parishioners do not agree with the directives of the pastor, if they are discontented with the work of the assistant in the parish, they are quick to report their discontent to the bishop’s office. This is not something that is easy to get accustomed to.
I am also surprised with the way the people here give money directly to the priest. They are very generous and they are not shy about giving the priest cash for even very little things. Sometimes when you are leaving their house after a friendly visit they give you a “small gift” of 10 or 20 dollars. I don’t know if I should be embarrassed to them or not.
---------------------------------------------------
Missionary? Who, Me?

The life of a missionary is not easy. The life of a prophet was not easy. We only have to read the stories of Balaam, Isaiah, Amos, Jonah, Judith, Jeremiah and the Apostles to understand what the missionary is expected to do. God does not call anyone to the “easy life.” God calls us all to the “impossible life”. We are all called to be the exceptional shepherd who would leave the 99 sheep behind to go seek the 1 who strayed. We are all called to be the 1 leper who came back to recognize the love and the power of the Savior. We are all called to be the missionary who does not stow away but who goes willingly to Niniveh to do the work of God for as long as it takes to get it done. We are all called to convert ourselves from blind to seer in order to testify to the divine love of God in our midst.
The missionaries, no matter where they go, even in this day and age have to face the same challenges of the early Jesuits, Jean de Brébeuf and Isaac Jogues who came to the New World in the late 17th century. They faced human challenges on the natural front as well as on the supernatural front. They were murdered by the Hurons for their efforts and their faith.

The missionaries of today, like those of yesteryear devote themselves entirely to the call of Jesus. While it is true that there are creature comforts available to the missionary of the present day, the challenges of adjusting to culture, language, economics, climate, food and complex political behavior and expectations are the same as they ever were and are every bit as demanding.

Finally I say,
To all of us who think that we are not “missionaries”, I say, “Think again.” If we’re baptized, we are missionaries. We may not go more than one mile away from home, but we are missionaries. We are sent to our spouse. We are sent to our children. We are sent to our parents, to our In-laws (Now, that is foreign territory, right?); we have to answer the challenge of new eating patterns (just ask my new daughter-in-law); we find ourselves in new economic situations more often than we would like; we find out that even though we all think that we speak the same language, we often do not understand one another; we think that we have retired from raising children when all of a sudden we have a houseful of our children’s children, etc., etc.
We are SENT by God to everyone with whom we come in contact. Everyone around us has the right to reach out to touch the “hem of our garment” in the search for healing and comfort. We are all a piece of God in flesh and blood. We are all required to walk side by side with Jesus, all the way from the Manger to the Cross.
The Manger is just around the corner. It is time for us to renew our commitment to the God who created us in His image and likeness. It is time to renew our conviction that His image and likeness includes the creating and sanctifying Word that is about to come again. We missionaries are procreators in and through God’s Love, God’s Word and God’s Loving Spirit, now and forever.

Like Jesus therefore,
Let’s carry the wood of our own holocaust bravely, every moment; Lie down upon the altar of sacrifice; Never lose sight of Jesus who is just a few steps ahead of us showing us how it is done; Keep our sense of love and let the zeal of His house consume us.
After we’ve done that, there won’t be a tear shed at anyone’s funeral, especially not mine!

Amen.
Posted by Papa Puttss at Wednesday, December 13, 2006 No comments: