This is not a eulogy about Tim Russert. I did not know him personally, so I do not come here to eulogize him. I come here as a person who makes comments about Catholic life for the Internet Catholic Life Style Magazine, "ParishWorld.net".
Tim died suddenly, at work, on Friday, June 13, 2008. He was the moderator of the television show, "Meet the Press" for more than 20 years. It appears in Sunday morning, so many of us never get to see it. I, for one, used to "catch it" occasionally in replay later in the evening. It was always interesting, but not always worth my staying up late after a busy Sunday of RCIA and other Church oriented efforts.
The reason why I am taking some time to write this is because it is rather uncommon, if not rare, to see a public person such as this referred to as "Tim Russert, a devout Catholic" time after time by those making comments about his life. So many practitioners of journalism came before the television screen and said something like, "Tim and I were Irish Catholics..." I am writing this because this is one of those times when Catholics get their moment on the sun. The person who has just died has shown us what it means to be a "devout" Catholic. The virtuous and righteous life that this man led was an example of holiness for all those around him and it did have an impact. It was so powerful that even they who would not normally confess their faith in public now do so with pride. This is evagelization in the prophetic mode. We too must go forth and do the same.
I leave you with a quote from one Irish Catholic, ex-Senator Patrick Moynihan to Tim Russert when Russert had just begun working for Moynihan, "Don't be impressed about their education. What they know, you can learn. What you know they can't learn." Let's keep that in mind as we live our lives in the world.
I have been following the on-going covereage about Tim's untimely death and I have to confess that I have never before heard public people testify to their personal faith to the extent that I have experienced over the last two days. Reporters have testified to their Judaism, Anglicanism, Catholicism, Lutheranism and said that Tim's witness to his Catholicism was an important element in teaching them the importance of religion in their own lives.

This is a person who has had and will no doubt continue to have an impact on our lives. Don't cry for him...and for sure, don't cry at my funeral.
Posted by Papa Puttss at Saturday, June 14, 2008 No comments:

A PRIEST COMES TO LIFE 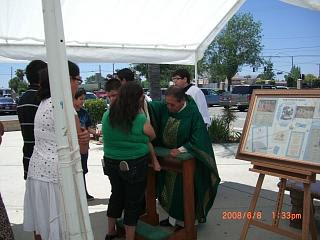 It was June 8, 2008 when Father Eduardo Aguirre came back to St. Christopher Parish in Moreno Valley to celebrate his first Mass. The reception was nothing less than magnificent. The Church was packed, for two Masses in a row. The plaza in front of the church was overflowing. There were some tents to accommodate the faithful who wanted to receive his first blessing. They were protected from the sun but even if there had been no tent, they still would have been there.
This is no ordinary priest to the people of St. Christopher. This is their priest. This is the priest who as a deacon for the last ten months attended to their every need, blessed their children, their homes, their cars, their rosaries and their sick, suffering and dying. He is a priest who became a priest gifted as much by the faithful as they are gifted by him. This is a priest who doesn't stand on ceremony and doesn't expect to be served hand and foot. This is a priest who blesses people with his firm and sincere embrace, the whole family at the same time, not just with a waving sigbn of the cross over their head. This is a priest who knows that in the embrace of blessing, the Grace flows both ways.
Father Aguirre was ordained a priest by Bishop Barnes on May 31 at the church of St. Paul the Apostle in Chino Hills. ParishWorld.net was present at the ordination. St. Christopher parishioners in droves were peppered around the nave. These same parishioners are so happy that "their" priest, the fruit of their prayers and their help is now able to perform to the fullest extent of the sacrament that he chased for so long. Father Aguirre was a deacon for seven years before being ordained to the priesthood. He served archbishop Mahony for many of those years. Then, God solved his problem, he introduced him to Bishop Barnes. Bishop Barnes asked Father Romeo Seleccion, MS, pastor of St. Christopher to form an internship committee to work with the deacon. So it was done. The committee was sincere and honest in its calling and the deacon was docile and responsive. In the end, it was easy to recommend that Eduardo Aguirre be ordained to the priesthood.
There are those at St. Christopher who are convinced that this experience has been God planting the seed of priestly vocations in this parish. The one thing that has not happened in the parish yet is that one of its children be ordained to the priesthood. After more than fifty years, there are now some from the parish who are in seminary preparing for the day of priesthood. One is getting very close. A couple more are two or three years away and a couple are just beginning. The response to the success of Father Aguirre, as it relates to the community of St. Christopher is, in the mind of some, the furrow which will accept and nurture the seed of more priestly vocations in the parish in the years to come.