THESE DAYS THERE ARE NOT SO MANY MARTYRS # 1

The title of this post is a quote from the pulpit on the feast day of the Memorial of Saint Andrew Kim Taegõn, priest and martyr and  Saint Paul Chõng Hasang, martyr and their companions, martyrs.
Not so fast, Father.  You might want to check the news occasionally about what is going on in Iraq, Iran, Egypt, Yemen, Syria, China, North Korea, Indonesia and other exotic and interesting places around the world.  This century is but 11 years old and there are already several people who have spilled their blood on the ground, protecting their faith and their corner of the vineyard of God Himself.  You might say that several (10+) is not a large number and indeed it is not.  But then again, when Deacon Stephen was stoned, it made the Scripture, and that was only 1.  I am not suggesting that because we now have fewer than when Diocletian was running wild that we should rewrite Scripture.  What I am saying is that giving blood witness for the sake of God is a sacrifice with eternal repercussions and should be respected and venerated as such.  In order to give some meaning to to the deaths of the people who have died for their faith in the last eleven years, I invite you all to this new series dedicated to the 21st century martyrs whose names have made it to the contiousness of the Communion of Saints dwelling here on earth.
We start with Father Ragheed Aziz Ganni and three sub-deacons of the Chaldean Catholic Church.  The sub-deacons were Gassan Isam Bidawed and Basman Yousef Daud, cousin of Father Ganni and sub-deacon Wahid Hanna Isho.
These four men of God were gunned down after boarding their cars after the Sunday Holy Eucharist on June 3, 2007.  It seemed as though it might have been possible for Father Ganni to escape the ambush.  To his credit, he knew that the assassins were looking for him, do in order to lessen the damage and to try to  save the lives of the others, he did not run away.  The thugs threw him to the ground as they unloaded the other cars and demanded, "why did you not close the church like we told you?"  He answered, "How can I close the Church?"  With the answer, the four witnessed to their faith with their blood.  They were placed in their cars which were then blown up by bombs that were placed inside the vehicles.  Sub-Deacon Isho's wife who was spared by the killers witnessed the whole thing.
I invite you to read the more complete reporting of this incident here.


A personal note:
I know relatives of Father Ragheed who live in San Diego.  They had T-shirts made with his likeness on the front.  I know that they were angry in one way and proud in another.  There was no crying over this death.


Next to die was Father Ganni's bishop.  His story is next.
Posted by Papa Puttss at Monday, September 26, 2011 No comments: 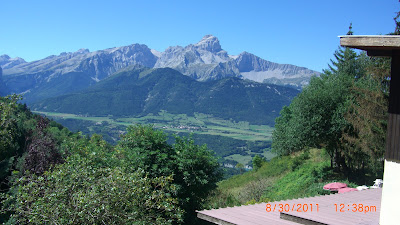 It is impossible to live a Catholic life without being a dreamer.  When I stop and think about it I realize just how much I dream.  My dreaming rarely takes place during sleep.   I dream all day long.  Sometimes even 25 hours a day!  Unlike Jacob, Joseph and the Magi, I get my dreams during the day.  I'm too busy with more important things at night.  When I'm there I'm practicing what being dead feels like.  I do admit that after a few hours of that exercise, it does feel good to be able to see the ceiling over my head.
xxxxxxxxxxxxx==========xxxxxxxxxxxx
The first sentence above is the driver of the following.  I have written several paragraphs of "religiously neutral" thoughts about "Random Thoughts" in other venues.  I felt empty when I wrote those because I was striving to find a "natural" meaning to the phenomenon of "Random Thoughts."  I enjoyed the search, but all the while I knew the truth.  I am more comfortable with my Catholic convictions about thoughts that "just run through my coconut."  I am 100% comfortable with the faith that what comes to me freely, not as the response to some perceptible stimulus, comes from Grace.  God and his company of saints and angels want me to know something consciously that can help me to lead a better life.  I lead a life full of these wonderful nudges to my brain and my heart and my soul.  Let me give you a few little examples of the kind of "spiritual life" that I lead.  All of a sudden I think of someone whom I know to have been critically ill.  It has been six months since the last word about this individual.  I say, "Our Father, if you're telling me that you've taken this good lady by the hand, I am happy for her.  If she has to wait a while before joining you in the Garden, please take some of my pain and put it on her tab.  Oh, and by the way, please continue to take care of those she has left behind."  It is more often than not, the case that the person has left the valley of tears.
There is also the time when I notice a missed telephone call from an unknown number, from a weird area code.  I, have the habit of calling back to see who called.  If it is the IRS, I just tell them that they're lucky that day because I prayed for the caller before ringing it up.  One IRS lady was happy to hear that.  God bless America, right?
Our Catholic life has changed somewhat in the calendering of the saint of the day.  We used to be able to tell whose birthday it was that day by checking the name of the saint for that very day.  It's not like that too much any more.  The old habit dies hard though.  I find myself writing E-mails to Joaquin, George, Louis, Maria, Lucia, Perpetua and some others who inhabit the spiritual part of my brain, usually referred to as the soul.


I live this way because it is a convenient way for me to remember to pray.  Not just FOR the person I suddenly meet in memory, but to GOD whom I consider to be the master of what I am and do every day.  It is good to have a sensitivity to the divine presence.  It is good to keep ourselves alive to the action of the Holy Spirit in our lives.  It is not difficult to remember to pray if we stay awake to the "random" nudges that God gives us many times every day.  We have to respond immediately.  If you're like I am you say to yourself, "I'll get back to this one."  That's the one that I lose because it is here now and gone in a trice.  So I thank God that He does that for me.  Keeps me remembering not so much of Him, personally  but all those people and events that slide into my mind and heart from unexpected and even, unstimulated sources...except God Himself, of course.
If you get into this habit, you will discover a change in your life.  Don't thank me for it, just don't cry at my funeral.
Posted by Papa Puttss at Saturday, September 24, 2011 No comments: