I don't want to be disrespectful, but would you blame someone for wanting to get away from the traffic noise?  Of course not.  Surely, Jesus wasn't laid to rest by the side of the paved road that you see here.   Besides, this particular tomb is in the Galilee.  That's close to 100 miles north of Jerusalem, so some  rich person must have occupied this one.  The best article I have discovered about "Rolling Stone Tombs" is available to you by clicking here.

It is clear that this style tomb was never very common.  Mainly because it could only be acquired and/or built by the wealthier people of the time.  The picture below will give you a perspective of the size and possible weight of the stone.  There are three ladies sitting in front of the main entrance to the tomb. You can tell that the round stone is rather massive.
From this picture it is easy to see why the ladies who were going to attend to the care of the body of Jesus were so preoccupied about how to move the stone away from the opening.
After having spent long periods of time in front of the opening of the Sacred Tomb where Jesus was committed, I thought that I had been moved to the apex of my emotional, spiritual and intellectual reactions.  That tomb with which I was very familiar has been radically changed because of the baroque architecture surrounding it in the church of the Holy Sepulcher.  It looks like this.
I was mistaken.  When I saw the bare stone tomb in Galilee, I came to the realization that this was the real thing.  I came then to the knowledge of Faith that Jesus had begun his earthly life in a cave that His created Mother Earth offered Him and that she once again provided Him with the shelter he needed as He was preparing to return to His Father's side.
I hereupon leave you with my prayers and wishes for a happy and holy Easter.  I also remind you that now that you know that I am carrying all these things in my heart, it is impossible for you to cry at my funeral.
Posted by Papa Puttss at Saturday, April 23, 2011 No comments: 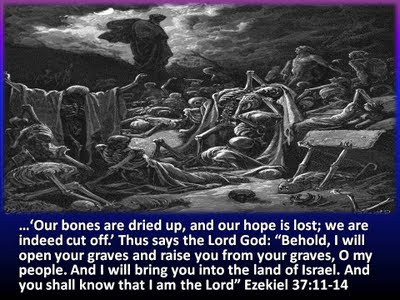 http://www.youtube.com/watch?v=SOSWaJPC2yY&NR=1
Give it a listen for old times' sake
What better time to let you know, once again my spirituality of life here and life after here.  Today (April 10, 2011) together with millions of other Catholics I heard the story of Ezechiel prophesying to the bones of the departed.  The vision that he had was set up by God to encourage him to preach a message  of hope to the despairing Israelites who were still captives of the Persians.  It was Ezechiel’s mission to make the People of God aware that they were still alive and that they should not die in spirit because God would set them free.  After all, He had done it once before when He guided their forefathers out of Egypt, right?  In this vision, God was also revving up Ezechiel so that he would be an effective missionary to the people.
Here, I am going to dip into the homily that I heard this morning because I think that the priest (Arnel Macabio, M.S.) hit it on the head.  He said that sometimes we are the same as dead.  Our bodies are walking around, but our spirits are disconnected.  Dead, as it were.  We are empty shells.  It could be because of a lack of physical energy; it could be because of a tired spiritual energy; it could be because of serious sin that we are carrying around in our conscience.  In short we are reduced to being cadavers in the cemetery of the Lord.  There we lie, just outside the walls of the Eternal Jerusalem with neither energy nor desire to drink in the Grace of God, get up, grab a partner and dance our way through the Holy Gate.
We, after Ezechiel, have heard the Word, we have been filled with the Spirit sent by Jesus.  All the more reason why we should not spend too much time as empty shells.  If Ezechiel can animate the dusty bones of the Chosen People, the Resurrected Christ has already provided us with the strength and hope that we need to stick by Him and make the Kingdom happen. Now.
If Ezechiel could reawaken the despairing Israelites, the Risen Christ can keep us awake, take us by the hand and walk us through the Garden and introduce us to the Heavenly Jerusalem.  So, let’s all wake up, help one another to LIVE and if we do that, you won’t have to cry at my funeral and I won’t have to cry at yours, whichever one comes first.
Posted by Papa Puttss at Sunday, April 10, 2011 No comments: