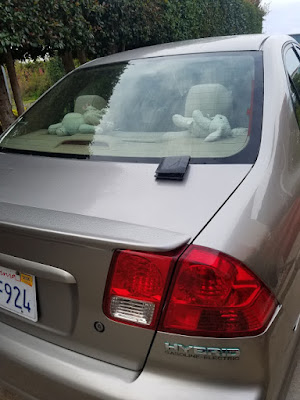 WARNING:  This photo is posed.  Here is why.


The other day the Voice from the Kitchen and I were on our way to the market intent on buying the provisions for the week.  I was wearing a comfortable pair of sweatsuit pants that do not have pockets. I was carrying my cell phone and my wallet and the car keys in my hands.  I also had other items that I had to place on the back seat.  To do that, I placed my wallet in the position that you see here. I did all that I had to do, almost, went around to the driver's side, got in, started the car, assured myself that the lady was comfortable and left.

It is nearly seven miles over city streets to the market and traffic was fair to middling on a cloudy and light rain MLK Day.  At a traffic signal six miles into the travel, we were stopped in a line waiting for the light when all of a sudden we heard banging on the passenger side window.  We both looked and there was the smiling face of a handsome teenager who was waving what I immediately recognized as my wallet.  We were shocked and confused and fighting the complexity of our emotions and the fact that we were in traffic, the boy waving the wallet was in the street, of course, the windows were up and the light had changed.  I finally lowered the window, Spouse took the wallet and the boy ran back to the vehicle from which he had come.
The Voice from the Kitchen got into gear and the babble was a torrent of prayerful gratitude and deprecatory invective trying to describe the foolishness that ruled my life.  Let the generalizations suffice.  You don't need the details.  After about a half mile there was a pause in the noise level, so I asked if she had any plans to inspect the contents for completeness.  "Oh, my!" says she, "I forgot."  To confess, I must say that my thought process had been short-circuited and I was just beginning to rewire the cervical synapses.
She opened the wallet and it was still home to all that it contained when we left our driveway.
We still talk about it in hushed terms.  We remind ourselves of the bright eyes and the 200 watt smile of the honest young man blazing through the window.  We constantly sigh sincere prayers of gratitude to the Lord above who nudged our guardian angels into protective action to assure the stability of the wallet laying in such a precarious place.

PS  Because of the head protector and the stuffed animal, my view was totally blocked.

When I die, remember stuff like this and it will keep you from crying at my funeral.