WHERE HAVE I BEEN?

Where have I been?   Here, all the time.  I have to admit that I have had a dip in my drive.  All my life I have had highs and lows, and lately I have had a low.

Part of the reason, I think is that I have spent some significant time with doctors.  They are not very warm and fuzzy characters as most of you might know.  The most interesting element of my opinion of them is that the older I get, the cloudier their behavior seems to get.  Besides, the older I get the more conscious I become about the length of my wick.  The candle is still bright, but the floor is getting closer to the top.  But, thank God, the flame is still bright.

Talking about God.  I've been talking a lot to Him lately.  He has a way of inserting Himself into my thought process, mostly when my head is comfortably nestled in my nightime pillow.  It is at this time too that Mama Mary sits quietly by and inserts a spirit of calm and comfort into the "conversation."  I see her eyes peering into mine, although mine are shut.  I kid you not!

Here I am after a CT Scan, with contrast.  That included some weid chemicalsmin my veins.  I was supposed to  have a hot flash after the filling of te vein with this poison, but nothing happened.  Maybe I'm a tin soldier or something.

Here is the anticipated path I'm looking at for the next 5 months:

a. Bi-lateral of drainage tubes in my kidneys, Nov 6

b. Chemo therapy for at least 4 months.

c. Excision of the cancerous growth connecting my bladder and my prostate.

Ya gotta admit, ain't never a dull moment in this Covid-19 World!  All of this just before the month when we connect to the dearly departed.

"Live every day to its fullest.    After all, you only die once!"

Hey, have you ever been told by your doctor that you have cancer?  It's a fairly strange feeling.  I and you have been told by any number of relatives, friends and relatives that they have Cancer.  I had an uncle who was an "original" as we used to say in my youth because that is not usually a compliment in our vernacular.  But...he was a very interesting character.  A collector of hand guns and coins...and a connoisseur of both.

One Saturday, at a picnic in our back yard, uncle Phil, that was his name, in his deepest, most serious voice announced that he had been told that he had the "Big C."  I knew that this was serious but I couldn't fathom why he had not just said "cancer."  It just went over my young head and flew by my early adolescent self and I turned to devouring frankforters.  He lived quite a long time after that.  He did die from cancer, but at my age I did not follow the case.

For those of you who knew Phil, his youngest child (Tony), is sitting in a Veteran's home waiting for the sunset.

Since then I have had to eliminate frankforters and hamburgers from my diet.  But Cancer?  Yeah, I'm looking into it.  I hope it doesn'r exacebate my gouty toes!  I have come quite familiar with the news.  A lot of it comes to me over the Internet, e.g. "I won't be writing much anymore, I've been told that I have stage 4 cancer."  Thank you.  Most often I come to know about it when suddenly the emails stop.  I give it a week or so...Hmmm, "lemme see."  Yup, no answer,  RIP.

So now, after all that, I have to say that I have a cancer that is very rare.  Hey, if you're going to have something, it might as well drive you to the science sources, right?  The doctors are scrambling to figure out what to do about it.  I don't blame them, neither do I.  I have to say that it is not very pleasant to talk about it because it is one of those X-Rated attacks that make life very interesting but less pleasant than it was before.  So far it is still more interesting than challenging for me.  Plus, there is good news about it all ... The discomforts and inconveniences, pain and such are minimal (so far) and  --  the doc is a man.

JOBS? YEAH I'VE HAD A FEW 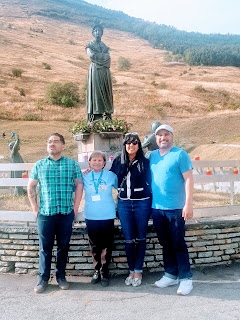 That's the one, way on your right.

The other day I was talking to my son, the first of the two.  He has been out of work for a couple months now and is job hunting and considering his options going forward.  Since then I have been thinking of the ways that I have found to earn my keep, or even just my privilege to come home day after day with an idea of where I would be and what I would do on the morrow.

Starting in the Summer vacation after grade 6, (1949) this my gainful effort biography:

2. Opening up a clogged sluice ditch for an auto body shop owner.

5. Worked for a construction company. (Under the table)

Preparation for ministerial career and service in the ministry.  Then, in 1977, I left the active ministry and started to live in the "real world."

a:  Interior painter, some employment, some contract

I can't let you go without mentioning the several years that I spent as a pilgrimage organizer, mostly to the Holy Land and occasionally to the site of the apparition of the Blessed Virgin Mary to two cowherds in the French Alps at La Salette.

With a past like that, I don't deserve any tears at my funeral.

Heart beats inside Paul Dion's body, not counting what happened in the warmth of the womb. I used 60 as the average beats per minute. 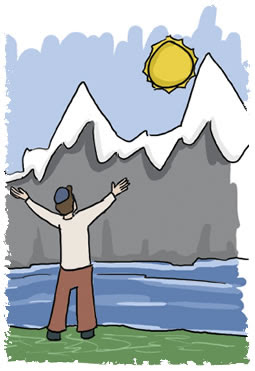 I think that it is time to blow the whistle and call a miracle.  The kind of miracle that surrounds us every moment of every day.  These miracles are omnipresent and matchless in their steadfastness.

I was driving for an enterprise that had a small fleet of vans to transport people to the dialysis treatment center.  One of my regular passengers was a rather aged Cherokee.  That's important because she was proud of it and she was spiritually immersed in her religious and cultural roots.  Friday, 5:00 AM, I accept her in her wheelchair upon the hand-off of her son.  She greets me as usual and then adds, "This is the last time."  I respond, "God be praised."

I drove her to the dialysis parlor, dropped her off and attended to her after the treatment.  Just as we were leaving the treatment location, she repeated her farewell, "This is the last time."  I again responded, "God be praised."  I dropped her off in the care of her son and left.  One hour later her son called to tell me that she had died.  It is worth noting that her legal name was "Morning Sun."

Now, I am not the only one with these experiences of this nature.  I hope that this short relation will awaken you to an appreciation of similar miracles that have come home to you.  While you're at it remind yourself not to cry at my funeral.

Posted by Papa Puttss at Tuesday, September 29, 2020 No comments:

Hello to one and all.I want to take the liberty to reflect with you on the spiritual dimension of Labor Day.  It is one of our oldest federal legal holidays.  (1894)
I dare to bring you back to the very first pages of the Holy Bible where the roots of Jewish and Christian faith find a basic teaching about work and labor.
Genesis :  Chapter 1; verse 21, etc:  God created mankind in his image; in the image of God he created them; male and female He created them.  28 God blessed them and God said to them: Be fertile and multiply; fill the earth and subdue it.  Have dominion over the fish of the sea, the birds of the air, and all the living things that crawl on the earth.  29 God also said: See, I give you every seed-bearing plant on all the earth and every tree that has seed-bearing fruit on it to be your food;  30 and to all the wild animals, all the birds of the air, and all the living creatures that crawl on the earth, I give all the green plants for food. And so it happened. [6th day]
Chapter 2:

Why am I proposing these thoughts to you this day?  Because it is Labor Day, the one day in each year when the people of the United States celebrate the efforts that hard working men and women make to keep the country happy, healthy, wealthy and wise. 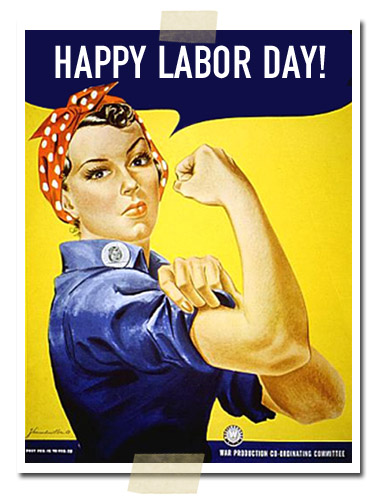 To see a historical overview of this poster
click on the link below:
https://www.history.com/topics/world-war-ii/rosie-the-riveter
We believers in the Word of God as found in the Bible, here in the first pages of Genesis, rest our faith in the command of God to take dominion over all that He has given us.  It is no secret that this command entails work, lots of work.  It also means that the reward is not just for the direct "worker" but for the benefit of all of creation - Labor.  The flourishment of all creation for all creatures depends on the concerted effort of every descendant of Adam and Eve.
The concept of "Labor" is a rather challenging one and would require more than the +/- 300 words here.  That aside, since the name of the holiday is "Labor" and not "Work" it falls upon us to reflect a bit on the meaning that is carried in the concept of "Labor."
"Labor" is, in fact, a generic term.  Think of it this way: The final cost of any commodity or service is determined by the entirety of the human efforts it takes to bring it to tangible reality.  The distinct human efforts that go into the final product to give it its final value, are "Work."
In Genesis 3:
The LORD God made for the man and his wife garments of skin, with which he clothed them.
22 Then the LORD God said: See! The man has become like one of us, knowing good and  evil!  Now, what if he also reaches out his hand to take fruit from the tree of life, and eats of it and lives forever?  23 The LORD God therefore banished him from the  garden of Eden, to till the ground from which he had been taken.  24  He expelled the man, stationing the cherubim and the fiery revolving sword east of the garden of Eden,  to guard the way to the tree of life.
It is to be noted that it is the "work" of the human that is being targeted while the finished product that results from it is the sum of the "labor" that redounds to the human's benefit.
Our Labor Day then, is as much a time for faith-filled reflection as it is of human thanksgiving for the fruits of human efforts, personal as well as communitarian.
Therefore, I implore all of you to thank our Loving Creator for endowing us with the gifts that we use to make human life better thanks to the gift of creative understanding with which He endows us, not just here in North America but across the globe.
As you mull this over, don't forget that it's against Dion's first commandment,
"No Crying at my Funeral."

Posted by Papa Puttss at Monday, September 07, 2020 No comments: