THE JOY OF LOVE - MATRIMONIAL LOVE, I MEAN

I have read the papal encyclical "Amoris Laetitia" and I have to say that there are many beautiful things that are said here about conjugal love.  The first seven chapters are not an easy read for a lot of reasons. My greatest difficulty was that it was hard to get by what struck me as the constant reach for another way to say the same thing.  In term of encyclical writing 101, this particular effort does not shine very brightly.


I have to say that it is perhaps that I was reading in anticipation of meeting what I had been told were serious difficulties with the orthodoxy of the letter that I was already being critical of what I had before me.  Maybe yes, maybe no.  My jury is still out on that.


Chapter 8 struck me as the one where the pope steps in “it.”  I have to say that the sacrament of matrimony is an extremely complex reality.  It is a mixture of secular requirements and ecclesiastical ones.  It is a contract and a spiritual vow.  It engages the conscience in challenging ways. Marriage is marriage for the whole of humanity but it is in the Catholic Universe that it is defined as a sacrament – a divine grace handed down to us by Jesus Christ.  It is the sacrament for which the ministers are the two spouses.  The people who give themselves to life in matrimony live in a world that tests the grace of matrimony in many changing ways every single day.  Every single day the sacramental grace of matrimony is tested in the vastly demanding and dynamic reality of the world.


It is my opinion that in this encyclical the pope tried to do something that none has every tried before. He tried to make public what is impossible to make public.  The conscience of human beings does not lend itself to the public square.  There is no human being who can judge another human being’s conscience through direct knowledge of it.  All any human being can do for another is to offer the measures of the boundaries of right and wrong. The exercise of the behavior is always under the control of the one who is behaving.


The pope in this letter waded into conscientious personal behavior territory at a level that is impossible to legislate or even to regulate with any hope of success.  The realities that one confronts in a myriad of matrimonial “situations” are too convoluted and too personal to be the object of absolute rules and regulations. The behavior that they call forth can only be judged between God and the “actors.”


I spent many years working in the marriage tribunal of the Catholic Church in two dioceses.  I cannot begin to recount the human entanglements to which I was privy and expected to untangle.  I cannot tell you how many “impossible situations” I had to consider.  In the end, I don’t know how many, if any, of the believers who were living these “situations” decided to participate fully in the sacraments (Eucharist) as a matter of conscience after they left my office unrequited.


I have not spent any serious time reading the oceans of “ink” that have been spilled in the discussions about this encyclical.  It is my guess that many of the discussions revolve around the absolute requirements of the Gospel and the attendant documents of the Church through the ages.  I have not spent any time studying the impact that the Church’s exercise of the annulment process has felt due to the reaction to the encyclical.


Finally, I reiterate, the pope tried to answer the question, “Who among you whose animal had fallen into a well on the Sabbath not work to free it from death?”   There is also the consideration that tending to bloody victims of crime on the Sabbath is left to the occasional Samaritan who happens by.


Yes, Francis, some things are better left alone.   Matrimony x 2 is one of them.
I tell you all that if you enjoy love to the hilt, you will not be close to crying at my funeral.
Posted by Papa Puttss at Sunday, February 11, 2018 No comments:

WHAT SOURCES DO YOU LEARN FROM?

I was asked this question the other day.  It came from a person whom I respect and so I know that it is not troll bait, or chum as it is sometimes called in the "trade."
I must say that the question caught me by surprise.  I had to admit that I have but one final, do not pass "go" source, The Bible and the Intellectual and Spiritual Treasury of the Church.  From there I use the dept and breadth of the Internet to feed myself, and there through the use of print media as it appears electronically.  I am an habitual reader of
NBC
VOX
DAILY BEAST
WASHINGTON POST
HUFFINGTON POST
NEW YORK TIMES
LE MONDE
FIGARO
BBC
Those are for current events.
Customary research sources are
NEW ADVENT
VATICAN/HOLY SEE SITE
BIBLE

I am also accustomed to perusing the writings of the ancient Greek Philosophers, especially Aristotle, Plato, and Socrates.
I like William of Ockham and finally I admit that Karl Marx is someone whom I admire, especially his theory of material dialectic.

I am a free thinker and I do not identify myself as a liberal (leftist) or a conservative (rightist) and  do not align myself with any of the contemporary talkers and thinkers.  I allow myself to question the positions of those who have them and posit them in the public square.  I am convinced that my opinions and convictions are every bit as valid as anyone else's and I am not afraid to express them.  I do not align myself to  an existing political party or social movement.

I do not consider myself a relativist but I strive to keep myself in the dynamic center of the truth.  I am convinced that it is in the center where the truth is in constant dynamic development toward its inevitable final absolute and eternal reality.  I identify that with the one real absolute in which I believe and to which I cling.  To wit, the transition from this life to the next and the effort that it takes to live up to the expectations of the Eternal God.

Oh, and the last absolute, there is to be no crying at my funeral.

HOW TO BE GOOD ACCORDING TO JOHN THE BAPTIST 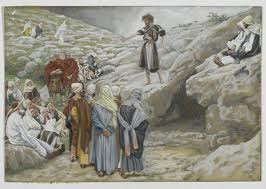 John the Baptist is a person who was totally dedicated to God as a Nazirite.  This dedication required that he not shave or cut his hair, that he not imbibe any alcohol and that he refrain from sexual congress.  There were Nazirites who could maintain that level of sacrifice for a year or two but very few of them ever made it a way of life until the day they died.  As we know, John spent some time in the desert and then he staked his mission claim on the banks of the Jordan in order to prepare the chosen people for the coming of the Messiah.  John, the bridge from the Old Testament to the New, spreading the word of God at the very place where God led His people into the Promised Land.  The description of his physical appearance is not that complimentary.  Wrapped in sheepskins, eating wild honey and whatever other edible wild thing he could grab.  He's a person who must have been ugly just from the odor that exuded from him.  But there he was, testifying to the world that the Messiah was in the area, just as the patriarchs and the prophets of old had promised.  Despite his appearance, he was a powerful force for God.  He had a following, and a devout one at that.  One day, some people came at him with a desire for answers  Three questions came at him from three different slices of the population.  All three of his answers were cut and dried and all three should have been known by those who ventured to ask them, because all three were, and still are, expressions of basic morality as foreseen in the Law and lived out by John and Jesus and their followers until this very day.
You know how people are.  They just have to ask.  So the questions come from
1. good people
2. tax collectors
3. soldiers
Whose missing?  The politicians

As for me, along the years I have come to know and love the song of David that goes,

Whoever walks without blame, doing what is right,
speaking truth from the heart;

Who does not slander with his tongue, does no harm to a friend,
never defames a neighbor;

Who disdains the wicked, but honors those who fear the LORD;
Who keeps an oath despite the cost,
lends no money at interest, accepts no bribe against the innocent.

Don't cry at my funeral

Posted by Papa Puttss at Thursday, February 01, 2018 No comments: