JOHN THE BAPTIST, DOOR TO THE NEW AND EVERLASTING COVENANT 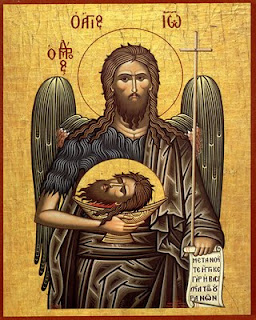 It is a little late to be writing about John the Baptist whose feast day was June 24. I must confess that this great moment sneaked up on me from behind a screen of other thoughts.  Then, all of a sudden, I was at the Holy Sacrifice of the Mass and the priest was announcing the solemnity of the feast of John the Baptist.   I happen to reside in Southern California where there are precious few Canadians and even fewer residents who realize that this is the patron saint of Canada.  If John the Baptist had waited a few more years, I'm sure  that he would have been a great hockey player.  You think I'm being disrespectful?  What do you think of the individual who was inspired to paint an icon of John carrying his own head?  They don't come any tougher than that.  The artist felt that deep inside of himself.   The artist was moved by the Spirit to depict the fore-runner of the Messiah as someone who had achieved a degree of faith that drove him through the barrier of Old Testament animal sacrifices to the covenant of personal sacrifice.  John's understanding of this mystery put him in the league of the Maccabees and of course, prepared us all for the ultimate sacrifice of Jesus, Son of God Himself.  We can understand the sacrifice of Jesus better because of the sacrifice of John.  There is also another facet of the mystery of Jesus about which the being of John the Baptist enlightens us.

John the Baptist is the last in a line of four miraculous births.  All of them to elderly women who, until the intervention of God Himself, were barren.  Think Sara, mother of Isaac, son of Abraham.  Thank Hannah, mother of Samuel, son of Elkanah.  Think of the nameless saint, mother of Samson, son of Manoah.  Finally, think of Elizabeth, mother of John, son of Zechariah.  Old ladies.  Brave ladies who finally have a boy child and who generously give him to God, for God's purposes, not their own.  All of these boys are precursors of the Messiah, Our Jesus who, among them all is born of a YOUNG, VITAL, FRESH, STRONG woman who gave him to God just like her ancestors had done, even though she did not have to go through the years of despair that they did.  She was not old and experienced, she was young and virginal.  We will never fathom the mystery of the faith that resided in these women, old or young.  Was it more difficult for Elizabeth to bear a boy and give him back to God, than it was for Mary?  We'll never know, will we?  We do know one thing, all the previous mothers gave their children back to God under the Torah. Elizabeth and Mary gave theirs back at the blossoming of the Torah into the Law of Love.  Could they have done it without the example of those who had done it before them?  Yes, of course, for they were God's "angels."  Would we have been able to understand the mystery of the Marian and Elizabethan sacrifices as deeply as we do now without the three previous examples?  I don't think so.  God wants us to learn from the past.  The stories of the past form the tradition of today.  This is the teaching method of God.  Jesus is today's Isaac.  Born of a young mother, founder and communicator of the Law of Love, successor of David and Eternal King over the redeemed Chosen People.  John had no choice but to announce the arrival of the Messiah and then prove to the world that self sacrifice in the tradition of the Chosen People, from Abraham, through the Maccabees, through Elizabeth and finally through John and Jesus formed the soul of the New and Eternal covenant.  I am convinced that in the plan of God, John had to die a violent death for the sake of the Kingdom so that the death of Jesus would not come to anyone as a complete surprise.  Why there are still some who cannot see this, is as deep a mystery as the one that enlightens the hearts and minds of others.  Our salvation is the work of the Trinity using tough, loving saints like John the Baptist as collaborators.  What a consoling thought.
May God bless you all, and may He bless you in a special way for not crying at my funeral.