THINK ABOUT IT - MY THOUGHTS PLUS 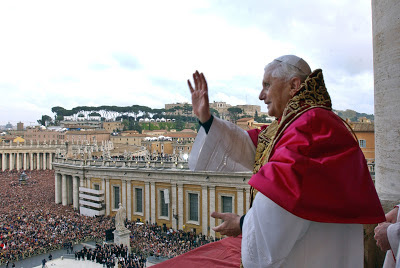 The other day I wrote some preliminary ideas about the pope's abdication.  Hmmm, some people don't like that word.  Be that as it may, I let it stand and I continue to offer you some thoughts about this historic action. I have been finding it strange that so few of the reviews that I have read about this behavior do not seem to be overly concerned about the spiritual impact of the moment.  It reminds me of when I was in Rome during the days of Vatican Council II.  Every day, on our way to classes, during recess from class and on our way home from class, all we talked about were the politics that were being reported in the secular press and floating around based on gossip, hearsay and innuendo.  This period of time keeps reminding me of that.  So many conjectures, guesses, opinions, theories, projections and convolutions that it is practically impossible to concentrate on the real meaning of the fact.

Therefore, let me indulge in another exercise of conjecture that I prefer to label, reflection, rather than some of the other names I have thrown out above.
I my blog post of February 11, I mentioned about the lesson concerning the faith that Benedict XVI has that the only real authority is the one in heaven.  It makes it easier therefore for a human being to step aside and let the Lord, our God make someone else His Apostle.  I am surprised that I seem to be in the minority on this one.  So I will put some other spiritual opinions before you this time.
Jon Meacham writes in "Time" Magazine:
"It is now possible that his (Benedict XVI) most enduring act of public witness to the Gospel will be the remarkable spectacle of a prince of the church voluntarily surrendering the things of this world.  Just as John Paul II offered a testament of suffering in his last years, Benedict XVI has given us something rare among the most mighty: an example of Christian piety that was quite unexpected."  (Time, Feb. 25, 2013)

Professor Pietro De Marco of the University of Florence has grasped most incisively the significance of the audacious resignation of Benedict XVI.
"What is at stake, as far as human judgment can determine, is enormous. But in this I trust: just as the supreme risk of John Paul II in governing the Church with his suffering being obtained the miracle of the election of Pope Benedict, so also the risk, just as radical, of Benedict in handing the leadership of the Church back to Christ in order that he may give the burden of it to a new and vigorous pope will obtain another pontiff equal to the challenge of history.”
(http://chiesa.espresso.repubblica.it/articolo/1350433?eng=y)

There is great value in each of the two viewpoints that are held to be valid in the Church.  The one is that since God is in charge, the state of health of the apostle serves God's purpose, not matter what.  Then, of course there is the conviction in faith that a healthy mind, psyche and intellect fall more closely into the plan of the Divine will than the does the sad state of a severely damaged human being living as a symbol more than a leader.  Both of these views are valid and both are acceptable to God, I am sure.  In both conditions, the will of the human surrenders to the Will of God, the Supreme Authority.  That is why the Church  accepts the possibility that a resignation is also an act guided by God.

Those who spend some time pondering these mysteries are quick to say that this act by the present pontiff does not carve out a path to be followed by his successors.  Pope Benedict XVI knows that it is not for him to be a human example to follow.  He knows that every time is different and every apostle has his mandate within that time.  Benedict XVI knows the theology of the "Hour."  God is the keeper of the "Hour."  We have that conviction spelled out for us by Jesus in the Gospels.
It is written for us to see in all the reports of the decision of Benedict XVI that his resignation is not a spur of the moment act.  It is clear from all the reporting and even in the reporting of some of Benedict XVI's actions from as far back as a year indicate that he has been praying about this for a while.  Who is to say that he did not have it in the back of his mind eight years ago as he stood on the balcony of St. Peter's?  To me it is clear that he and God have been talking about this for a long time.  They were both waiting for the "Hour."  They came to the conclusion last week.  Good for them.

All politics aside, the Church against whom the gates of Hell will not prevail continues on her way.  We will all contribute to her welfare and she will continue to cover us with her wings.  Benedict XVI is teaching us that it is not we humans who are in charge.  Let us all therefore stand tall before God and vow our continued support to him no matter what human He chooses to guide us going forward.

Hey, what is this, Vatican City Spring?  The end of the one infallible head of state came so quickly that no one had the opportunity to fire one single shot.  It's hard to imagine what young mothers are now going to do when there won't be a pope for about a month or so.    Whose going to do the honors?  All you babies, get yourselves to Vatican City in a hurry because there isn't much time before the pope is no more.  Oh, there will be another one, but you'll have to wait.  It doesn't seem as though the army got rambunctious or anything.
Supposedly that's the way things go when your army is composed of a bunch of guys from a neutral country.  It is quite impressive to see how those same "neutral" guys maintain law and order in their back yard.  They don't look like they're packing heat, but then, who can tell with those baggy suits they wear?  Not only that, but when you get to size up the halberd that they carry around, I can assure you that whatever nerve you might have had to get wise in their back yard, calms itself down mighty soon.
Before I get serious, let me show you a picture of the commander-in- chief with his minions. 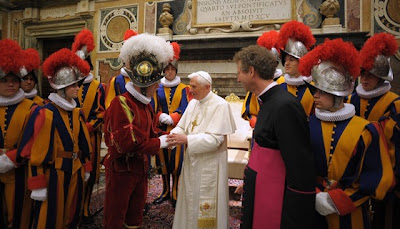 I know that I am prejudiced in favor of the Catholic Dictator that we reverentially address as Holy Father.  Nevertheless, isn't it worthy to make a comparison between this powerful human being and the other powerful ones who cling to power no matter what, to the point of killing their own people.  Here we see a person who stared at life straight in the eye and realized that there is someone in the world who could handle the job better than he.  Rather than to cling to power and authority no matter what, he decided that it is time to go and give fresher minds a go at the job.
Over the last 600 years it has been automatic that the pope, the Leader of the Catholic Church, would take the job and get carried out feet first.  It was expected.  It was a testimony to the fact that it was not the individual human who was really in charge, but God Himself through the person.  That's one way of looking at it.  That is indeed the way that  Joseph Ratzinger sees it, but with a twist.  He sees it through the eyes of the God whom he knows.  The God of Benedict XVI is a God who needs only the best, the brightest, the healthiest and the strongest to do His work.  The Jesus Christ of Benedict XVI is the Head of the Church who insists that His collaborator at the top be in the best Spiritual and Human shape possible, from beginning to end.  Joseph Ratzinger would never let Jesus Christ down because he did not feel up to the job any more.  This tough minded and strong willed apostle would never burden Jesus Christ with a weak body that could not stand the annual trip from Galilee to Jerusalem.  No.  This Holy Father is taking his martyrdom standing up.  All but one of the apostles were put to violent deaths.  The one who lived the longest produced some of the best doctrinal teachings of the Bible.  Joseph isn't going to write for the Bible, but he is going to write to enrich the world with thoughts pleasing to God, you bet!
If you doubt that shrugging out of the mantle of authority can be called martyrdom, consider the behavior of President Bashar al-Assad of Syria.  The examples that we have seen over the last couple of years have certainly shown us the reality of the sway that authority and power have over people.

Pope Benedict XVI has taught us many things over the last eight years or so.  This however is perhaps the most powerful lesson that he has placed before us.  This is the lesson that the Kingdom of Heaven is the target.  The earthly calling that we pursue is measured by how closely it is related to the heavenly one.  Benedict XVI is making the point that he is not afraid to live the faith with which he has been blessed, that the heavenly calling comes first and the earthly duties to which he has been called must give way to the higher reality.  He doesn't want to be a weak human being serving a strong God.  He doesn't want to be a weak husband serving a healthy Bride.  He knows that there are other things that he can do to serve the Church.  He will do them.  He will have the time.  His Bride, the Church, will still have him around.  He just doesn't want her to be worried about him.  He wants her to have a strong and healthy leader while the 21st century of her life is still young.  Yes, I am convinced that Joseph Ratzinger is teaching us that earthly power and authority are nothing compared to the power and authority of the God whom we all serve.  Joseph Ratzinger is not afraid to die to himself for the greater glory of God.  He is one head of state who will not have to be brought down by an anonymous drone.  He has opted for the love of God over the crown of authority, yes, even infallible authority.
Posted by Papa Puttss at Monday, February 11, 2013 2 comments: